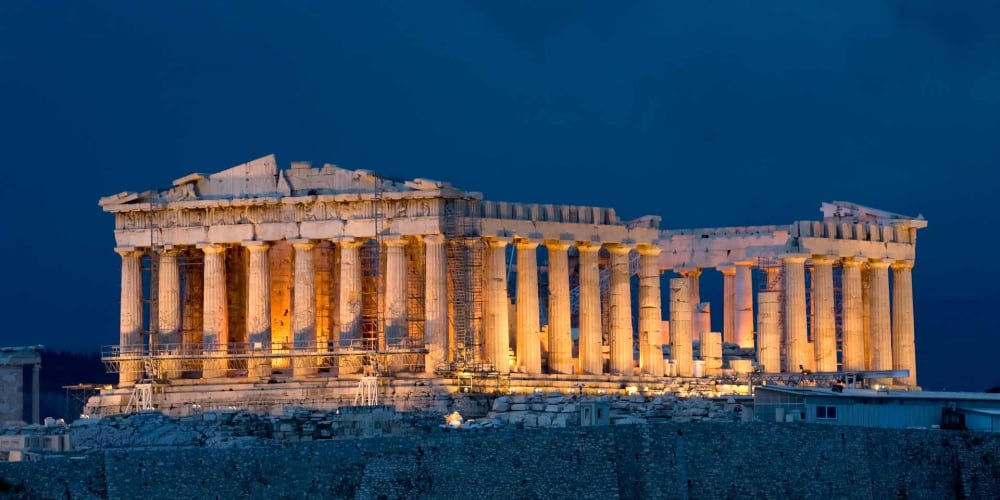 The Greek capital for culture, gyros, history, ouzo and fun !

Athens is a large cosmopolitan metropolis and central to economic, financial, political and cultural life in Greece.

Athens the capital of Greece was a powerful city that emerged from the seagoing development of the port of Piraeus which was a different city prior to its 5th century BC incorporation with Athens.

The heritage of the city comes from the classical Greek era and architecture. The city retains Roman and Byzantine monuments, as well as a smaller number of Ottoman monuments. Athens is home to two UNESCO World Heritage Sites, the Acropolis of Athens and the medieval Daphni Monastery.

Athens is also home to several museums and cultural institutions, such as the National Archaeological Museum, featuring the world's largest collection of ancient Greek antiquities, the Acropolis Museum, the Museum of Cycladic Art, the Benaki Museum and the Byzantine and Christian Museum.

Athens was the host city of the first modern-day Olympic Games in 1896, and 108 years later it welcomed home the 2004 Summer Olympics, making it one of only a handful of cities to have hosted the Olympics more than once.

Athens has well developed public transport system and easily to get around without needing a car. The city during rush hour can appear to be very congested and chaotic. Taxis are plentiful and generally relatively cheap.

The main airport is located around 35 kilometers (25 miles) from the city centre. You can reach the city centre from the airport by taking the metro line 3 or by express buses which operate from the airport and drop off at several city centre locations. The airport bus journey take approximately 45 minutes. Athens is a bit spread out and not necessarily a compact city to walk around but if you are staying down town many of the tourist attraction can be seen walking around the city.

Athens is a city with no exclusively gay or hetero friendly hotels but has a number of very gay friendly places to stay. It is a city that has many conventions and corporate events so it is always wise to book your accommodation in advance to guarantee availability and choice.

The gay neighbourhood area is called Gazi and there are some places to stay around this area by the majority of people stay close to the main tourist attractions and go out to Gazi in the evenings.

There is a lot to see in Athens and you could easily spend a couple of weeks visiting the numerous tourist attractions, historic monuments & museums. As the majority of visitors will spend just a few days in the city as many are in Athens on the way to the Greek Islands we would recommend you visit some of the attractions listed below

The Acropolis & Parthenon is one of the most visited monuments in the world and certainly Greece’s most famous. The Parthenon is the finest monument on the Acropolis. You will need to buy a ticket to enter but many people just view from outside.
The Acropolis Museum houses many of the Ancient Greek artefacts.

Hellenic Parliament has ceremonies for the changing of the guards and take place at the Presidential Mansion and at the Tomb of the Unknown Soldier, which is off Syntagma Square.

Other Greek monuments and ruins are to be found around the city so you can just wander and discover.

Plaka Neighbourhood is an area close to the Acropolis and has busy and bustling atmosphere with lots of cafes, restaurants and shops.

Pandrossou Street Market is a market lot of food outlets and shops in a nice cool area of town to hang out enjoying the nice weather.

Athens as a city has a gay neighbourhood called Gazi but there are other bars around the city. The gay scene has a lower profile than other major capital cities. The gay scene is more regular and definitely has a Greek feel.

Big Bar is a gay bar popular with bear types of guys and has a very friendly atmosphere and quite cheap drinks. Many people go there before going to a club.

Koukles Club is a popular drag-cabaret bar featuring amazing nightly shows. It's located near Eirini Square in Monastiraki and it's something unique so worth to visit when in Athens!

Moe is a very popular gay bar and nightclub for people who want to party until dawn. Occasionally they arrange themed gay parties and special offers on the cocktails.

S-Cape is a very mixed gay club that attracts all types of crowds including transsexuals, lesbians, younger gay men and their older admirers.

It is considered a lower class of club as cheaper than the other clubs.

Sodade2 is amongst the most popular gay bars in Athens. It is located in the centre of Athens and been open for over 12 years attracting a mixed crowd. They charge entrance which includes your first drink. It gets busy around 1-2am and particularly on Saturday night.

Shamone is considered one of the hottest and chicest venues in Athens with a wide range of cocktails and spirits to enjoy surrounded by Greek hot guys. They charge entrance which includes the first drink and the crowd is guys in age range of 25-40. They occasionally arrange gay performances.

The Apartment is a gay club with 2 rooms playing mainstream house and dancing music. It has an entrance fee including your first drink and it attracts a wide range of ages. They organize many themed nights and amusing shows.

If you are staying centrally in Athens there are plenty of typical Greek tavern and gyros places to eat. Look for places to dine with your eyes and nose to see the food being eaten by other diners and if the customers are cute.

Alexander Sauna is Athens’ most popular gay sauna located in the heart of Gazi. You can’t miss the Alexander as is a tall buildings huge rainbow flag on the side. It has 4 floors and the address is Megalou Alexandrou 134.
Ira Baths is one of the oldest saunas in Omonoia are and relatively popular with those living in this neighborhood. The address is Zinonos 4.

Athens does not have the typical shopping areas like many large cities. The shops are generally spread through the city.

The main LGBT event in Athens is the Gay Pride and held in June. The parade is held on the Saturday evening and the main highlight of the pride weekend. Attendance is low compared to other large cities but an enjoyable event with nice Greek atmosphere.

The majority of visitors to Athens spend some time there on the way to the Greek Island for holidays and therefore if you are in Athens for a short period with some extra time suggest you ask at your hotel or at a travel agent in the city centre where you can go for a day trip as this changes with the ferry schedule every depending on the time of year.