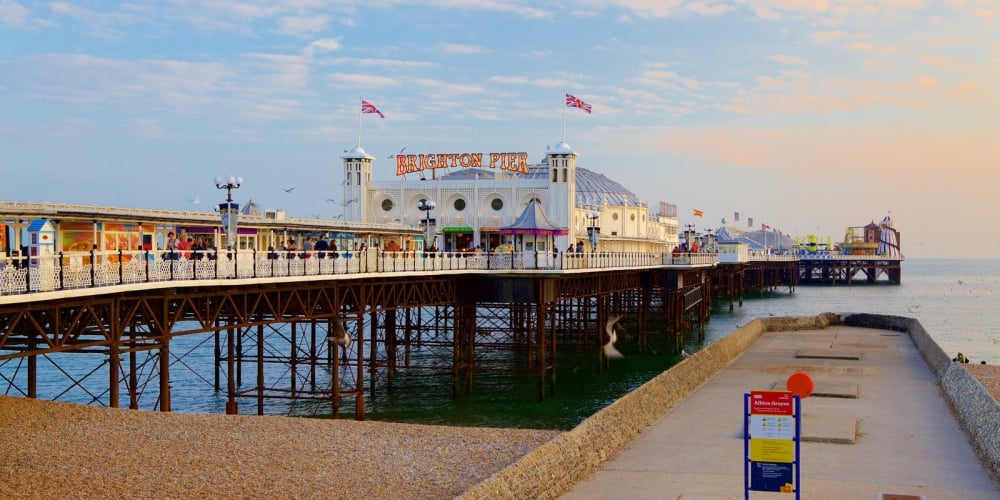 Brighton home to the biggest gay pride event in UK !

Brighton is a seaside resort on the south coast of England and closest seaside resort to London. Many people have given the town the pet name “London on Sea”. It is a relative small town with around 300,000 inhabitants.

Historical archaeological evidence of settlement in the area dates back to the Bronze Age, Roman and Anglo-Saxon periods. The ancient settlement of "Brighthelmstone" from what the present day name originates was documented in the Domesday Book in 1086.

Brighton began to attract more visitors as the motorway and rail network connections to the town improved.During the Georgian era, Brighton developed as a fashionable seaside resort, encouraged by the patronage of the Prince Regent and King George IV, who spent much time in the town and constructed the Royal Pavilion in the Regency era.

Many of the major attractions were built in the Victorian era, including the Hilton Grand Hotel, the West Pier, and the Brighton Palace Pier.

Brighton's location has made it a popular destination for tourists, renowned for its diverse communities and large LGBT population. Brighton has been attracting gay visitors and is the one of the most popular UK weekends away destination for gay Londoners and why many have choose to move to the town.

The Brighton gay scene is mainly in the Kemptown and St James Street area of the town. It attracts both the large local gay population and the many gay visitors and tourists who flock here throughout the year, to sample the many gay pubs and clubs and has the most popular gay pride event in the UK.

If you are staying in the centre, the gay scene around Kemptown, the beaches and the main shopping and restaurant areas will all be within easy walking distance.

The nearest airport is Gatwick airport. If you are flying into Gatwick, the fastest direct trains from the airport to Brighton which take just 20 minutes.

Brighton has a number of LGBT owned guest house which are not exclusively gay but by the very nature are predominately gay. In addition to these guest houses there are a number of gay friendly hotels.

All the places to stay listed on our website are LGBT owned or gay friendly. The hotels get fully booked during the main gay events of Brighton pride and during the main public holiday weekend and holiday season so we advise you to book early.

Brighton Palace Pier is a traditional English seaside pier with fish and chips shops, slot machine arcades and the fun fair at the end.

Brighton Beach is mostly a pebble beach with a nudist beach at the far left hand side but does not have a gay section.

Brighton Marina is east of the sea front and a boat-filled Marina, with shops, cafés, restaurants and a cinema. You should take a bus or taxi to reach here as a bit of a walk.

Brighton Royal Pavilion is a landmark commissioned as a Royal Palace by the Prince Regent and later King George IV built between 1815 and 1823. It is not what you would expect of a traditional English place with Indian and Chinese influences so a little quirky with an English eccentric appeal.

The Lanes is an area close to the seafront and a maze of tiny lanes with craft and jewellery stores and small cafes and restaurants.

The North Laine is similar to the Lanes as it is a network of narrow streets filled with independent store selling bric-a-brac and trendy clothes as well as a few art galleries and bars, cafes and restaurants.

Bulldog is Brighton’s oldest gay bar. The Bulldog features weekly cabaret, karaoke night and some live shows. Upstairs has a more club atmosphere with DJ and at street level like a traditional English pub. It attracts a mixed crowd of guys.

Charles Street Tap is a famous gay bar & nightclub and one of the best in Brighton. The ground floor is a seafront bar & restaurant with a lovely outside terrace. In the evenings it becomes a busy bar with fun cabaret shows, live DJs and regular drink specials.

Bar Revenge is a pre clubbing music bar on the seafront. It offers a good selection of English draught and bottled beer as well as cocktails and wine.

Doctor Brightons is a well-known gay bar that has been open for over 20 years, but is popular with straight customers.

Legends is a café during the day and bar at night. It serves meals during the data on the terrace with sea view and then operates as a bar staying open late into the night.

Queens Arms is a bar renowned for hosting the very best drag queens shows. Queens Arms serves drinks and light snacks during the day and then the nightly shows at 8:30pm. The drags shows attract a mixed and gay crowd.

The Camelford Arms is a friendly relaxed no-attitude bar that attracts all types but popular with many of Brighton’s bears and their admirers.

Depending on where you are staying Brighton the town is full of cafes and restaurants. The choice of different types of food is great.
Look for places to dine with your eyes and nose to see the food being eaten by other diners and if the customers are cute.

The main LGBT event is Brighton Pride is hugely popular and always takes place in the first week of August. A large proportion of the gay population from London visit Brighton for the weekend of gay pride. The parade is on Saturday afternoon and then there is a party in the park. This has the best atmosphere of all the gay pride events in England and biggest number of people attending.