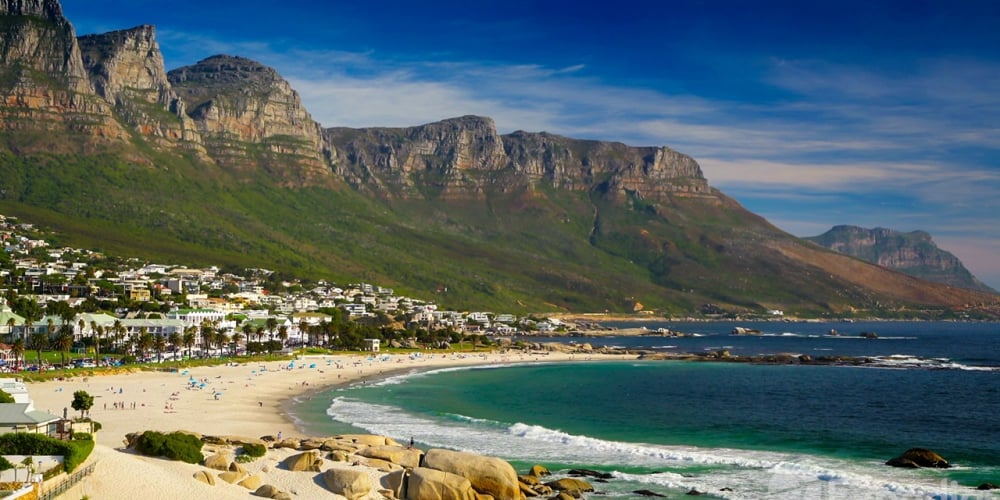 The gay capital of Africa with a Dutch influence !

Cape Town is a coastal city in South Africa. It is the capital and primate city of the Western Cape. Located on the shore of Table Bay, Cape Town was developed by the Dutch East India Company (VOC) as a supply station for Dutch ships sailing to East Africa, India, and the Far East. This was the start of the Dutch connection with the city.

Cape Town has a bohemian culture with a unique African influence. Partly because this casual vibe and partly because huge disparities remain between rich and poor you will feel most comfortable if you dress down.

Since 1994 when South Africa adopted its democratic constitution, equality has been the law of the land.

Being described as South Africa’s (and Africa’s) gay capital, Cape Town is one of the most popular destinations in South Africa for local and international LGBT members.

You can now marry your same sex partner, hook up at a club in the Sea Point or Waterkant gayborhoods.

The MyCiTi bus has a large network of routes and a safe and easy to get around.

Cape Town International Airport serves both domestic and international flights. It is the second largest airport in South Africa and serves as a major gateway for travellers to the Cape region.

Cape Town International Airport is approximately 20 kilometres from Cape Town’s city centre. From the airport you can catch a bus, use a shuttle or take a metered taxi.

You can also take the MyCiTi bus which operates between the airport and the Civic Centre where you can connect to other routes. You need a myconnect card to ride it and is available from the airport.

Metered taxis are widely available at the airport, and a trip to the city centre will cost between R400 and R500. Some have flat rates for the trip while others charge by the kilometre. Agree up front what the fee might be.

Cape Town has a small number of gay owned and operated bed and breakfast, guest houses and small boutique hotels several that are men only resorts as well as number of very gay friendly places to stay. It is always wise to book your accommodation in advance to guarantee availability and choice.

All accommodation bookable on this site are exclusively gay or gay friendly so you are assured to be welcome.

Cape Town’s vibrant and historic hillside village De Waterkant is the city’s most popular and lively gay friendly area. With its panoramic views and picturesque scenery it is away from the hustle and bustle of the nearby city centre.

There are two main beaches in Cape Town popular with the gay community.

Sandy Bay is the western Cape's clothing optional nudist beach. It about thirty minutes from south of Cape Town and then a further twenty minute walk.  The route is to take Victoria road from Camps Bay to Hout Bay and turn off at Llandudno.

Clifton Beach is one of Cape Town's most famous beaches and is a significant tourist destination in its own right. Clifton 3rd is the predominantly gay beach and is completely protected from the wind. It is where the cutest guys hang out. The beach faces west so the sunsets are stunning. Take care to "hide" any alcoholic drinks as drinking in public is forbidden and strictly monitored. The route is to take Victoria Road south of Bantry Bay or drive over winding Kloof Road from Gardens.

Cape Town is not only a popular international tourist destination in South Africa, but Africa as a whole. This is due to its mild climate, nice beaches and natural setting.

Both coasts are equally popular, although the beaches in affluent Clifton and elsewhere on the Atlantic Coast are better developed with restaurants and cafés, with a strip of restaurants and bars accessible to the beach at Camps Bay.

Cape Town is noted for its architectural heritage, with the highest density of Cape Dutch style buildings in the world.

Table Mountain is situated within a national park with phenomenal views overlooking the city of Cape Town. Peaking at 1,086 meters reached via an ingenuous Rotar cable car with a revolving floors allowing passengers to enjoy 360-degree views.

Boulders Beach Penguin Colony. There are not too many places in the world where one can walk on the beach, sunbathe or swim with penguins. Two penguins settled on this beach in 1982. Now more than 2,000 penguins call this beach home. These are African penguins that make a chirping sound. While the penguins are used to humans, visitors should look, but not touch them, as they may bite if they get scared.

The Castle of Good Hope is the oldest surviving colonial building in South Africa. The Dutch East India Company started construction on it in 1666 It is a Cape military installation today with the Castle Military Museum and the Iziko Museums of Cape Town. The Military Museum tells the history of the Cape and the Iziko Museum displays historical paintings and antique furniture.

The ‘gay village’ with its guesthouses, pubs, clubs and steam baths is concentrated in and around particularly in Green Point’s chic De Waterkant area.

Barcode is a men only leather bar with a theme each night. Inside you’ll find friendly barmen, slings, a maze and an accessory store for some fun! Address 18 Cobern Street, De Waterkant

Crew Bar has two dance floors and cute bartenders. The Crew Bar is very popular (but not exclusive) among the gay community in Cape Town. Address 30 Napier Street, De Waterkant

Amsterdam Action Bar is a men’s only bar situated in the heart of Cape Town’s gay village. This bar has an upstairs and downstairs section and has become a popular village type pub catering to the local, national and international LGBT community. The downstairs bar is equipped with pool tables and a small seating area which is divided to cater for both smokers and non-smokers. Address 10 – 12 Cobern Street, De Waterkant

The annual Pride festival is held in March and popular with local and foreigners from Europe escaping the European weather.