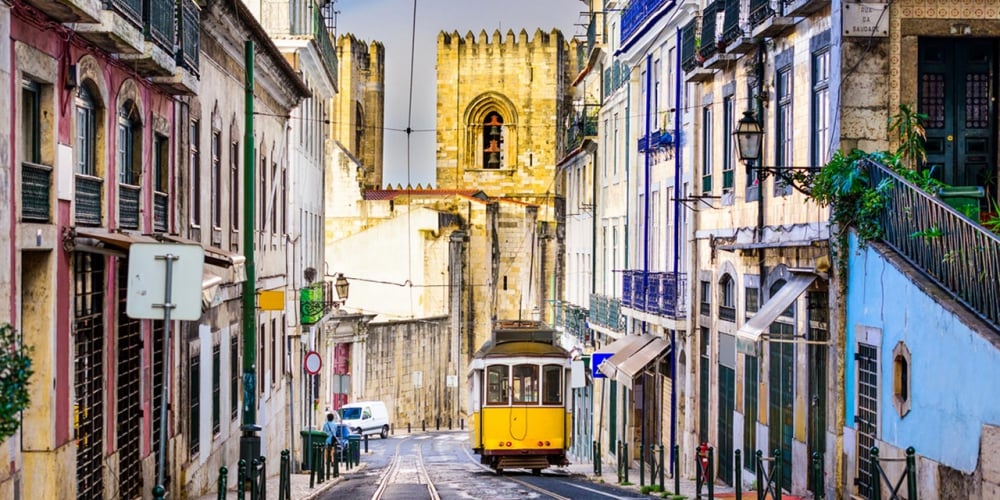 A city of hills, good food & wine and late nightlife ! A European version of San Francisco !

Lisbon is the capital and the largest city of Portugal, with an estimated population of just over 500,000. About 3 million people live in the Lisbon Metropolitan Area which represents approximately 30% of the country's population). Lisbon lies in the western Iberian Peninsula on the Atlantic Ocean and the River Tagus.

Lisbon is one of the oldest cities in the world, and in Western Europe, predating other modern European capitals. Julius Caesar made it a municipium called Felicitas Julia, adding to the name Olissipo. Ruled by a series of Germanic tribes from the 5th century, it was captured by the Moors in the 8th century.

In 1147, the Crusaders under Afonso Henriques reconquered the city and since then it has been a major political, economic and cultural centre of Portugal. Unlike most capital cities, Lisbon's status as the capital of Portugal has never been granted or confirmed officially – by statute or in written form. Its position as the capital has formed through constitutional convention, making its position as de facto capital a part of the Constitution of Portugal.

While the gay scene is small compared to other major cities it has a lot to offer LGBT visitors. The best area to stay in Lisbon is in the central neighborhood of Baixa Chiado, Principe Real and Bairro Alto is the gay area.

Lisbon and its surrounding areas are very easy to get around. The public transport system consists of a metro, trams, cable car and buses and generally very cheap. Make sure you are comfortable with walking as the city is very hilly and often compared as a smaller version of San Francisco.

The airport is located 7 kilometers (8 miles) from the city centre and takes 15 minutes via Aerobus which run frequently.  There is a metro station at the airport as well which is the cheapest but slowest way to reach the city centre. A one way ticket costs just less than €2.

Taxis are very cheap in Lisbon and should cost am maximum of €15 from the airport to the city centre.

Lisbon currently has one exclusively gay guest house as well as many gay friendly places to stay. As there is just one gay guest house it is advisable to book in advance of you want to stay there. The gay area is Principe Real & Bairro Alto and as Lisbon is a small city the majority of gay friendly places to stay are within a short walk of this area.

By staying close to Principal Real you will be centrally located in the city and close to the bars, clubs & saunas.

Lisbon is a city of seven hills which each have Miradouros which are lookout points on the different hilltops of the city. The landscape is incredibly hilly which makes for some of the most stunning viewpoints of any European city.   Some of the best and most popular miradouros are worth visiting are Miradouro da Senhora do Monte, Miradouro Sao Pedro de Alcantara and Miradouro da Graca.

In addition you should take a tram ride to see the city to give your feet a rest and tram 28 which can be crowded is recommended.   Lisbon is famous for Fado the folk music of Lisbon’s old neighborhoods of Alfarma. The Alfarma district of the city worth visiting but should be combined with a visit to the St. George Castle as it is close by. St. George castle dates back to 6th century and was originally a Moorish royal residence until the Portuguese captured it in the 12th century. The castle sits on top of one of the 7 hills in Lisbon overlooking the historic centre and the Tagus River.

Belem is the Portuguese word for Bethlehem and located 6 kilometers (3.7 mi) west of the city centre. If you are in the mood to walk and the weather is nice you can walk along the river Targus riverside to Belem. Many of Portugal's distinctive buildings and landmarks are located in this area including the Jerónimos Monastery and the Tower of Belém.  Whilst in Belem you should take a break and expresso with and try the Portuguese desert pastel de Belém which is typical custard tart.

The nightlife in Lisbon starts very late at bars around midnight and people go to clubs from around 2 am. The popular gay nightlife spots in Lisbon are located in both Principe Real and Bairro Alto.   People general drink outside many of the bars as they are typically small inside.

Tr3s is the most popular bear bar in Lisbon with happy hour from 4pm to 10pm. They offer a variety of drinks including both Portuguese and Belgian beers as one of the owners is originally from Belgium. There’s outdoor seating and it is located at Rua Ruben A. Leitão 2A, 1200-392.

The clubs scene is relatively small in Lisbon the 3 well established clubs.

Trumps is the largest gay club in Lisbon and one of the most popular. There are two separate dance floors with house and pop music.  It has a mixed crowd of all ages and types of guys welcome but tends to be more popular with younger crowd. The address is Rua da Imprensa Nacional, 104 B, 1250-127.

Construction is another large club located in Principe Real neighbourhood. This clubs is very popular with bears, masculine guys and older crowds. There are three different floors with the top floor occupied by a very cruisy dark room. It typically gets busy after 2 am. The club address is Rua Cecílio de Sousa, 84, 1200-277.

Finalmente Club is one of the oldest gay clubs in Lisbon having been open for over 35 years. It is a popular club with popular drag shows. Open every day until 6am with the shows starting around 3am.  The club address is R. da Palmeira, 38 r/c – 1200-313

Lisbon is full of restaurants and café the majority serving Portuguese cuisine.

Le Petit Bistro is a gay owned French restaurant in Bairro Alto. They offer traditional French cuisine varying every day as well as an appetizing menu with snacks, French-inspired dishes and some Portuguese and vegetarian specialties. Open Wednesday through Sunday and located at Rua do Almada 29, 1200-288.

Gayloa is a fun steakhouse and bar in Príncipe Real next door to Trumps club. The place is cosy and the kitchen is open until 3am from Tuesday through Sunday.  The address is Rua da Imprensa Nacional 116B 1200-257.

Manteigaria is tiny bakery and café in Camões Square that only sells pastéis de nata the classic Portuguese custard tart. These are some of the best quality you will find in Lisbon that are made continuously all day. Manteigaria is located at  Rua do Loreto 2, 1200-242

Trombeta Bath is the most popular sauna in Lisbon and located in Bairro Alto. It is modern, clean and very popular with the local gay community. Open generally 24 hours and located at Rua do Trombeta, 1C, Bairro Alto, 1200-471.

The Cock as a men only gay bar & cruising club. It is popular after hours once the bars and clubs have closed. It is located at Rua Noronha 5A, 1250-096 a short taxi ride from Principal Real and Bairro Alto.

The most popular shopping areas in Lisbon are the Baixa district in central Lisbon. You will find small designer shops in the Principe Real and the major high end luxury brands are along Avenida Liberdade.

Lisbon has a lower than average number of LGBT events than the other capital cities. The main 2 events is the Lisbon Gay Pride event which is a small march rather than the traditional gay parades in other larger cities.   There is also a Lisbon bear event organized annually by the most popular bear bars in the city.

Cascais which is a former fishing village located 35 minutes from Lisbon by train. It is a small coastal town with small pedestrian streets, fashionable shops, restaurants and bars. The historic centre has some nice architecture, museums and monuments as well as a very small sandy beach. You can take a train from Cais do Sodre train station in Lisbon to Cascais and the return fare is around €5.00 Sintra is a UNESCO World Heritage Site and is well worth spending at least half a day. To reach Sintra, take the train from the Rossio train station in Lisbon and takes about 40 minutes.