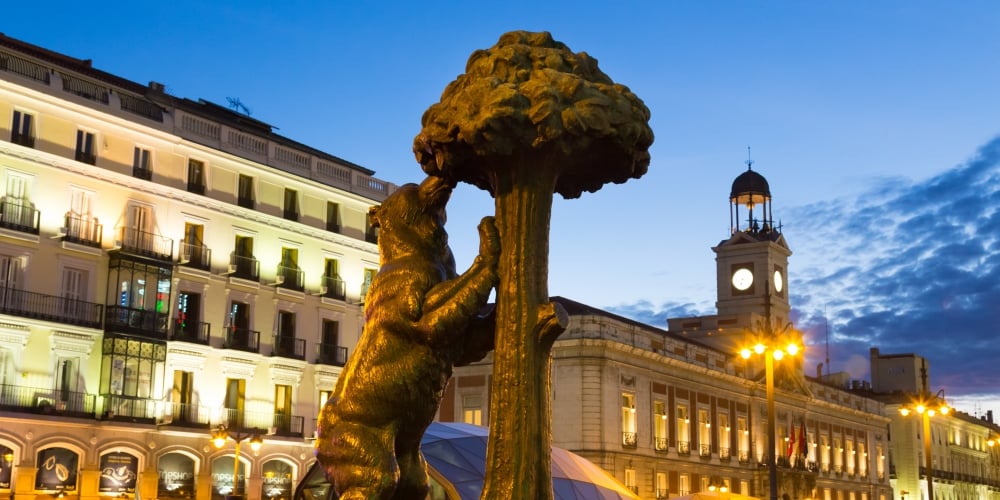 Madrid is the capital of Spain and a hub for many flights from Spanish speaking Latin America countries. The city has almost 3.2 million inhabitants and a metropolitan area with a population of approximately 6.5 million. Madrid is the most visited city of Spain.
Madrid lies on the River Manzanares in the centre of both the country and the Community of Madrid. As the capital city of Spain, seat of government, and residence of the Spanish monarch, Madrid is the political, economic and cultural centre of the country.

Madrid houses the headquarters of the World Tourism Organization (UNWTO), belonging to the United Nations Organization (UN) and hosts many major international regulators and promoters of the Spanish language. While Madrid has modern infrastructure and architecture it has preserved the look and feel of many of its historic neighborhoods and streets.

Its major tourist attractions and landmarks include the Royal Palace of Madrid; the Royal Theatre with its restored 1850 Opera House; the Buen Retiro Park, founded in 1631; the 19th-century National Library building that containing some of Spain's historical archives and a large number of national museums.

Madrid is very easy to get around as the city offer great public transport with a metro and frequent bus service. Despite the appearance of a large city due to the large avenues the city is relatively compact and you can walk easily around the main tourist attraction if you stay in the main gay neighborhood called Chueca. Taxis are plentiful and the mobile apps such as Uber can be used despite resistance from local taxis.

Madrid is a city with some exclusively gay or hetero friendly hostels or hotels as well as number of very gay friendly places to stay. It is a city that has many conventions and corporate events so it is always wise to book your accommodation in advance to guarantee availability and choice.
There are several LGBT events throughout the year and for most weekends year round book in advance to get the best choice of places to stay and to be able to stay in the gay neighborhood of Chueca and is centrally located in the city and hot spot with all bars, clubs, saunas etc close by..

There is a lot to see in Madrid and you could spend weeks visiting the numerous tourist attractions, historic monuments, art museums and parks. As the majority of visitors will spend just a few days in the city we would recommend you visit some of the attractions listed below
Art museums in Madrid are world displaying the masterpieces of the Spanish artists such as Picasso, Dali and Goya. The 3 main museums are The Prado, The Reina Sofia and The Thyssen Bornemisza.

Palacio Real is the former residence of the Spanish Royal family and the largest functioning palace in Europe. A ticket is required to enter the place during the data but they offer free entrance in the evenings.

Retiro Park is one of the most famous in Madrid and a massive park built in the 18th century reserved for usage by the Royalty until the 19th Century.

Madrid has a vibrant nightlife and sometime referred to as a city that doesn’t sleep. If you are up and outside early it is not uncommon to see the people from the night before walking home at 8am in the morning.

The city attracts many guys from the Spanish speaking Latin American counties whom work and live in the Madrid and therefore the city has a Latino ambiance.

Chueca is the centre of the LGBT community and where the majority of the gay bars and night clubs are located. You will not be disappointed with the nightlife in Madrid. Many of these places are packed at weekends and some even offer a great time during the week. In Madrid the nightlife starts extremely late, so don’t be surprised if you arrive at 11pm to a bar (1 am at a club) and it is still not crowded.

The is a large choice of bars in Chueca and therefore we recommend you just wander round the street of the area and stop for drinks at any that you like the look of and the crowd inside.

Madrid club scene is varied and there are several options depending on your taste in music, crowd and atmosphere you like.

DLRO Live is a large gay dance club that is only open at weekends and has two separate levels with different dance floors and music. Often promoters are around the streets of Chueca passing out free entrance wristbands earlier in the evening. Do not arrive before 2am unless you like dancing alone. The club is located at Calle Pelayo, 59.

Boite is a smaller open club which attracts a crowd aged from mid 20’s to mid 40’s and generally has a more relaxed environment. It is not mandatory to take of your shirt unlike other clubs and the majority of guys keep there on. They occasionally have special event or parties with a performance on stage. The club is located at Calle Tetuan, 27.

Baila Carino is a huge dance club with multilevel bars surrounding it. The music type is typical Spanish pop & top 40 dance music with mixed crowd. This club is located at Calle Isabel La Católica 6 and generally only open on Saturday night.

Kluster is another Saturday night only club with a very mixed and friendly older crowd of bears, circuit type guys, and daddys with electronic and house music. The clubs is located at Calle Covarrubias, 42.

The monthly and major event parties in Madrid are normally arranged by the WE party group and held at a venue called La Riveria. In addition the WE Party group arrange special parties for Madrid Gay Pride, New Years Eve and other times of year.

If you are staying in Chueca there are numbers restaurants offering all types of food. In addition to the restaurants there are the markets (Mercado) where you have lots of small kiosks offering different types of tapas and foods so you can try a mixture.
The 2 markets for recommend for food are Mercado San Miquel and Mercado San Anton.
Mercado San Miquel is in the centre of the city and has a good choice but slightly more expensive place to dine.  The address is Plaza de San Miguel

Mercado San Anton is another market with lots of different vendors offering a wide variety of dishes to eat. It has a roof top terrace good for an after dinner drink and to people watch while digesting your food. The address is Calle Augusto Figueroa, 24

In addition to the markets there is the Calle Cava Baja area which in the south of the city in the La Latina neighborhood. This is a great place to go for a late dinner where you will find almost 50 place serving lots of different types of tapa and drinks.

Gran Via is the main avenue in the centre of Madrid and most of the large higher end and typical midrange store can be find concentrated along Gran Via or in the side streets.

The main LGBT events in Madrid are MadBear, Sleazy Madrid, WE Party New Year parties and gay pride that attract over 1 million attendees and is the biggest in Europe.
Every April is the Sleazy Madrid event which is a fetish event over 4 days. This is the main and original Sleazy Madrid events and there are others held during the year.

Every December MadBear event attracts bears and bear lovers from around the world to Barcelona. This is fun & friendly event for the bear community.

Every July Madrid Gay Pride is held in the city with over 1 million people attending. This pride event is held on Sunday and precluded by pre pride parade parties the whole weekend. An event with a great atmosphere not to be missed.

Barcelona can be reached by AVE which is Spanish high speed train and journey time is just over two hours one way.  If you done have time to visit the city for a few days a day trip or overnight trip arriving one day and staying one night by train would give you the opportunity to experience the Catalan capital.
El Escorial is city approximately 45 minutes northwest from Madrid. This full name of the city is San Lorenzo del Escorial and famous for the massive monastery and palace complex built in the 1600’s. Travel to the city is available by bus or train.

Segovia is a medieval walled town approximately 1 hour from Madrid. Originally a Roman town famous for its aqueduct (a UNESCO World Heritage Site). Segovia sits on the top of a hill and has a Cinderella-style castle. Travel to the city is available by bus or train.

Toledo is another city 45 minutes from Madrid and was once until the 16th century the capital of Spain. The city was home to people of many religions including Catholic, Jewish and Muslim which formed part of the Spanish history at this time. Travel to the city is available by bus or train.